﻿Interview with﻿ Ann W. Jarvie,
Author of The Soul Retrieval. 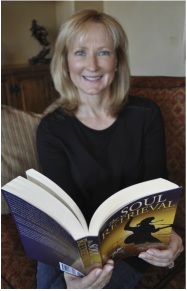 Q: In a nutshell, what is your novel about?

A: The Soul Retrieval is a suspenseful novel of love, loss and healing centering on a traumatized southern woman, her spiritual journey, the Native American mystic who guides her, and the murder mystery that ultimately threatens to unravel her.

Q: What was the inspiration for this novel?

A: My maternal grandmother, Henrietta, inspired the story. She lived on the Mescalero Indian Reservation with her physician husband until he mysteriously died there in 1919. I am a product of my grandmother’s second marriage, so by the time I became interested in this family mystery, most of those involved had already passed away. My mother was able to tell me a few stories about her mother’s positive relationships with Native Americans, but no one could answer the questions I had about her first husband’s mysterious and premature death. So I decided to make up a story about it. The Soul Retrieval is the result.

Q: How closely does this novel parallel your grandmother’s real-life story?

A: The only things the real and fictional Henriettas share are their first names, physician husbands working on Indian reservations in the Southwest, and the Victorian-style doctor’s cottages they both shared with their husbands and children while on the reservations. Most everything else about Henrietta Clayborn’s life and all of the other characters and events in the novel are pure fiction, including her family members and the towns of Medichero, New Mexico, and Greenfield, South Carolina, where the story takes place.

A: I chose an era when both Native Americans and women were seriously limited by the social norms of the day; I wanted it to be at a time that enabled me to believe the Native Americans were still practicing their spirit medicine, but in secret. I also wanted my main Apache character, Joe Loco, to be not only spiritually wise, but also amusing and quirky with an Elvis fetish and a ’50s fashion-forward sense of style––just for fun. In addition, it was a time in the U.S. when women were greatly limited by society’s expectations and therefore far more powerless than they are today. And it is this transition, from feeling powerless to being self-empowered, that I wanted to address as one of the novel’s main themes. Henrietta’s spiritual journey is about healing from trauma by overcoming her sense of powerlessness and her fears of the so-called forbidden in order to find the “Kingdom of God within.”

Q: What is your background?

A: I have a B.A. in journalism and more than twenty-five years’ experience as an award-winning writer in advertising and public relations agencies, both in South Carolina and Chicago. I now live near Phoenix, Arizona, where I spend part of my time as a freelance copywriter and the rest writing fiction.

Q: Your novel contains spiritual insights and mystical secrets. How did this come about?

A: I grew up in South Carolina and was raised in a traditional Christian culture. But I have always been intensely curious about and drawn to spiritual subjects and ancient mystical secrets outside of those conventions. I consider myself a truth seeker, which may sound ironic since I am a fiction writer. Even so, I enjoy doing research and asking questions (which may be why getting a journalism degree appealed to me in the first place). At the same time, I have always believed there’s an answer for everything, even if I haven’t found it yet.


As a child, I asked my mother endless questions about religious teachings and practically drove her crazy with it all. My curiosity was only sated when I started finding answers that resonated with truth through what some might consider unconventional spiritual paths, including Ascended Masters’ teachings, ancient wisdom teachings, Native American spirituality and the Law of Attraction. I began to see how the teachings of Christ were in alignment with some of these other “religions” and schools of thought. This insight was inspirational to me. The more I learned and resonated with, the more I wanted to incorporate into my novel.

Q: Your novel presents Apaches accurately and respectfully. What kind of research was involved in writing it?

A: I very much wanted to present the Apache characters in my novel with as much authenticity as I could because I respect, honor and value all Native Americans, their culture and their inherent goodness and spirituality. I spent years researching the Apache culture and the Mescalero Indian Reservation in particular. On a visit with my mother, we actually found the doctor’s cottage––an unexpectedly large Victorian-style house––where my grandmother, her husband and her children lived while he served as a physician for the U.S. Department of the Interior in 1919. The timing was fortuitous, because the doctor’s cottage was torn down the year following our visit.

Q: Who are your favorite authors?

A: My favorite author of all time is Pat Conroy: The Prince of Tides is beyond brilliant. It’s one of those rare jewels that never fails to inspire me as a storyteller and lover of words. I’ve probably read it a dozen times. There are too many other authors to name here, but a few who have positively influenced and inspired me (in no particular order) are Daphne du Maurier, Charles Dickens, Anne Rivers Siddons, Kurt Vonnegut, Paulo Coelho, Stephen King, Patricia Cornwell, Michael Connelly, Anita Diamant, Dan Brown, Barbara Taylor Bradford, Thomas Wolfe … I could go on.

Q: Are you working on other novels?

A: Yes, I’m currently working on the next adventure of Henrietta, which also explores the secrets of Bears Repeating. Stay tuned.